Why can coal slurry drying and ball pressing bring you huge profits?

After drying process, the water content of the coal slurry is greatly reduced, and the calorific value is increased, which improves the its value-in-use, and reduces the operating cost of the power plant. In addition, if the dried slime is briquetted by a briquette machine, it can fully burn to improve the boiler combustion efficiency, operation economy and reliability. In short, the coal slurry drying and briquetting is the best way to achieve the goal of turning waste into treasure. 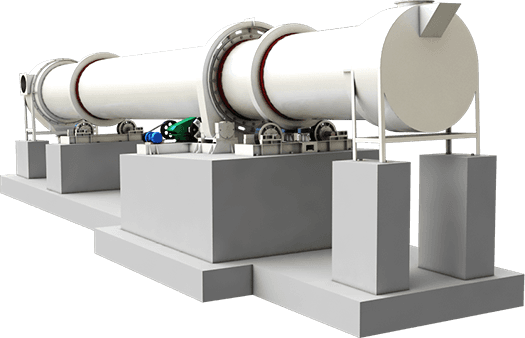 What is coal slurry?

Coal slurry is always produced with high-quality clean coal products in the process of raw coal beneficiation. It is difficult to utilize because of high water content, high viscosity, and low calorific value.

This kind of coal slime is generally a kind of waste, and its properties are similar to those of coal gangue.

This type of coal slurry is mainly either accompanies by steam coal at the beneficiation process or is produced after coal hydraulic transmission. This type of coal slime is even better than the raw coal, and you can mix a small quantity with the finished coal product.

3.Coal slurry entrained in mine drainage

This coal slurry is dirty but of better quality than floatation coal slime made at coking coal preparation plant.

Inappropriate treatment of coal slurry will cause the environment problems

Most coal slurry with high viscosity has a certain fluidity, which makes it difficult to stack, store and transport. Especially when being piled up, it is extremely unstable, thereby running off when it meets water, and flying away when it is dry.

The result is not only a waste of precious coal resources, but also serious environmental pollution, and sometimes even the restricted normal production of coal washing plants.

Improper ways to deal with slime

However, such comprehensive utilization power plants develop slowly, and are difficult to get construction approval. What's more, because coal slurry is dispersed in various coal preparation plants, it is difficult to be concentrated, plus needs long-distance transportation, thus resulting in obstacles to completely digest a large amount of coal slime.

2. Extensive treatment. Mix the large quantity of slime back into the coal and sell them together.

That way will lower the quality of the commercial coal, increase the ash and water content, and result in the increase of the transportation cost. Besides, it will also lead to clogging of the slime and the difficulty of unloading. In conclusion, extensive treatment badly impacts the effect of raw coal beneficiation. 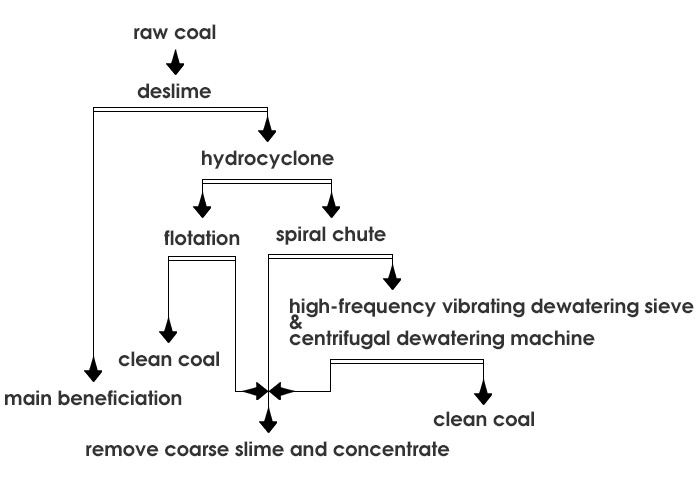 Flotation process is required when processing fine coal slurry. You should do the preparation before floatation and product dehydration after flotation well.

First, the preparations include controlling in the material granularity, concentration of floating, and the way to add flotation agent.

Direct flotation is a new method in response to the shortcomings of concentrated flotation. That is, the original slime thickener before floating is removed, which means that and the coal slurry water in production is directly entered into the flotation machine without concentration. Finally, flotation and jigging can work simultaneously. 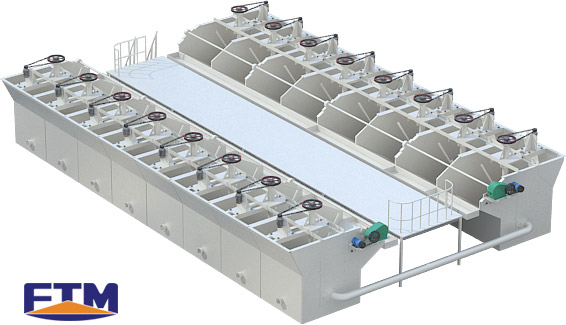 The advantages of the concentration flotation are the large range of adjustment on the flotation concentration, flexible operation, and relatively low investment and production costs.

The disadvantages are that the circulating water is still easy to accumulate fine mud, and there is still a lag phenomenon when the flotation starts and stops.

The coal slime drying system can dry and shape the low calorific value slime, which reduces the moisture and improves the calorific value. Then the dried product through upper belt blends with other coal in the furnace to increase the amount of coal slime and reduce the costs of fuel burning in the power plant.

Mainly adopt steam extraction of steam turbine intermediate pressure cylinder as heat source, supply pressure is about 0.5MP, temperature is 200-230℃, steam supply is 4t/h, steam flows into the dryer tube bundle, and the sludge in the dryer rotation project It is heated to process the wet slime with a water content of about 28%, and then processed into a round slime ball with a water content of about 14% and a particle size of 10-40 mm by a ball press. 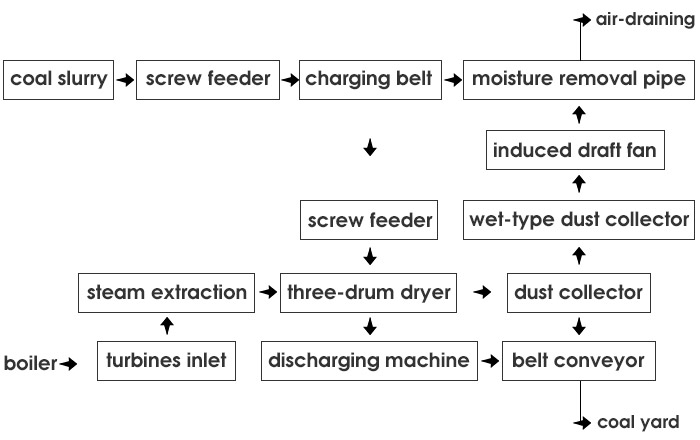 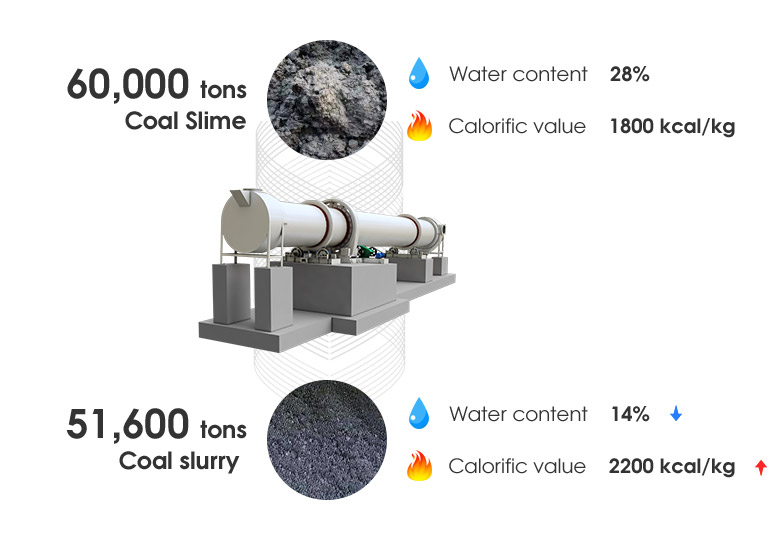 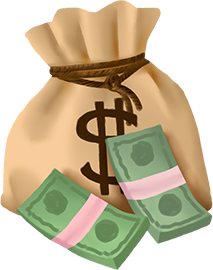 The crushed coal slime needs drying process to meet the requirement on the moisture content less than 28% so that the further briquetting process can be made. Coal slurry ball briquetting machine is the key equipment to recycle the coal waste, and whether machine structure is reasonable will directly affect the quality of coal slime balls.

1.The coal slime balls can burn more fully in the furnace than coal slurries directly burning.

2.Coal slime ball breaks the limits of small fuel supply selectivity at pit-mouth power plant. It can increase the amount of slime usage and the share of fine coal particles in the furnace. The 50% cutting particle size is reduced to d50=3mm, which improves differential pressure from 700Pa to 1100Pa. 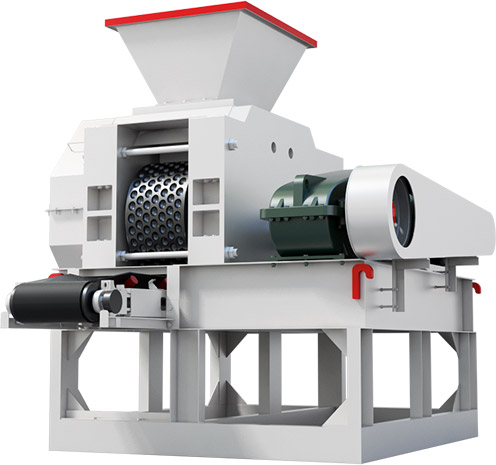 3.The use of coal slime ball improves the boiler combustion efficiency, reduces the furnace combustion temperature, and promotes the balanced combustion.

4.It greatly reduces the wear of the hood and the heating surface of the furnace, and improves the economy and reliability of the boiler operation.

Author : Jordan Jordan is the writer of the blog with a broad knowledge of this industry. Most importantly, he hopes to help you in your projects sincerely.
X