Silver: The Earliest and Most Influential Metal in the World

Silver is the earliest and most influential metal discovered by mankind, with a history of more than 4,000 years. Although gold is more valuable, silver is more versatile due to its unique properties.

Silver is an inactive metal. It is not easily oxidized at normal temperature and humidity, but silver oxide is formed when heated or pressurized. In its liquid state, silver alloys with gold, copper, and other metals.

Where can I find silver?

Silver is a metal that is widely distributed in nature and constitutes 0.08 parts per million of Earth's crust.

Silver occurs in nature in four forms: （1）Native element (rarely found); （2）Silver ores like argentite and argentite;（3）Alloyed with gold, mercury, and other metals; （4）Other ores like galena, copper ore, cobalt arsenide, gold mine, and quartz. Most silver is a by-product of the fourth form, which is then processed to recover sterling silver. 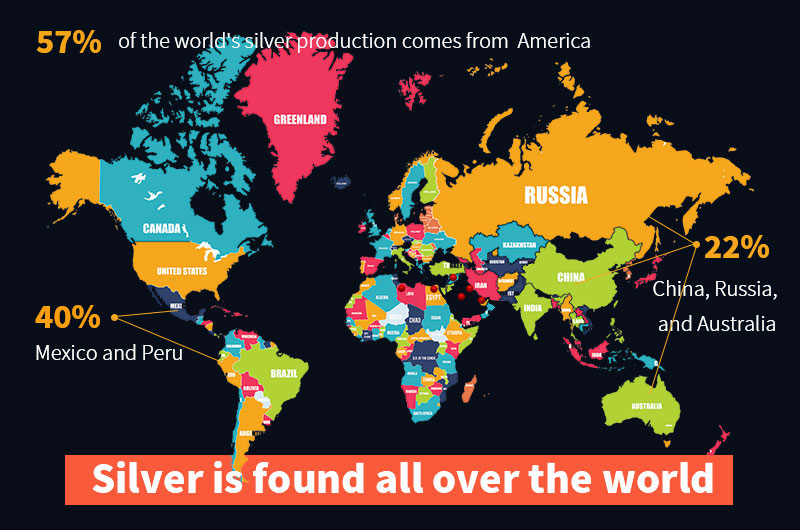 Can I invest in silver?

1. What's the price of silver per ounce?

The current price of silver per ounce is $21.61. It is not very likely that silver will hit $100 an ounce in the future. Similar to gold, silver can be volatile, but it can be used as a safe-haven asset to protect you in times of uncertainty. 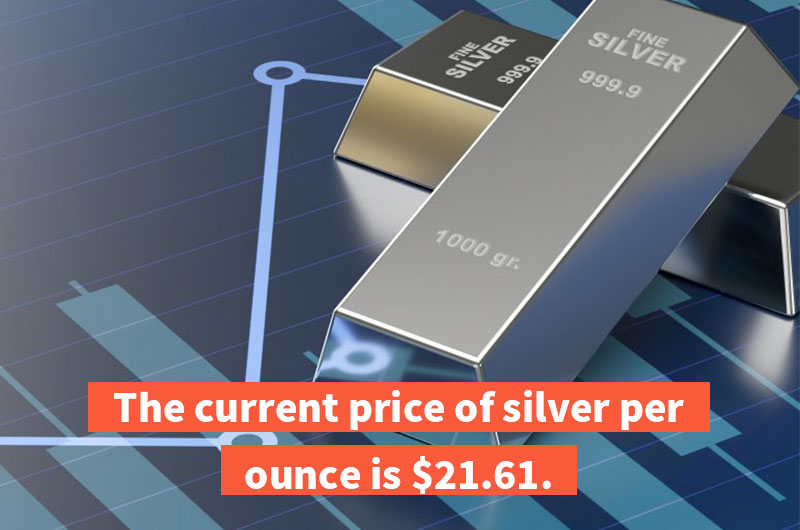 2. Is silver a good investment?

Investing in silver may be a good choice for those who want to preserve their wealth in difficult times.

Three reasons why investing in silver:

However, investing in silver can be annoying due to its poor liquidity, the danger of theft, and the ease of premium.

The old and long history of silver

Silver has a huge impact on the ancient world, especially in Europe. It has been of interest to the aristocracy and common people, being renowned for its uses in jewelry and coins.

In ancient times, the greatest use of silver was as a medium of exchange for goods-money. The sterling and the silver dollar used in China before liberation was silver-copper alloy. The largest financial institution today is the bank.

In more than 300 B.C. when Alexander, the king of the Macedonian Empire, was on an expedition to the east, most soldiers died of tropical, while the officers were safe and sound. It was because that the soldiers used tin cutlery while the officers used silverware. Silver killed bacteria to protect people from contracting the disease.

During the conquest of Greece, they healed the wounds with silver flakes and placed surgical instruments in silverware to avoid bacteria and viruses.

In ancient times, silver chopsticks were used to test food for toxicity. Forensic doctors used "Autopsy with Silver Needle" to determine whether the person died of poisoning, helping solve many murder cases.

The toxicity was arsenic trioxide. The technology at that time was backward, resulting in the arsenic trioxide being mixed with about 10% sulfur or sulfide. Silver reacted with the sulfur and produced the silver sulfide, causing the silver to turn black.

The silver toxicity test has been subverted by modern chemistry as it only detects sulfur impurities instead of all poisons like pesticides, and nitrites. Besides, kiwis and eggs also contain sulfur and can turn silver black, but they are not poisonous.

Silver nitrate was used as a medicine in ancient Roman times.

In 78 A.D. Pliny the Elder argued in his Natural History that silver had therapeutic effects, particularly in promoting wound healing. The ancients also used silver to treat stomach disease.

Silverware prevents food and liquids from spoilage and supplement the body with essential silver element.

2, 500 years ago, Cyrus, the king of Persia, ordered his troops to use silver jars for water, as silverware kept water cleaner than other containers. Phoenicians used silver bottles for water, wine and vinegar. Silver glasses made wine more aromatic.

Today, silver's primary use is industrial. Whether in cell phones or solar panels, new innovations are constantly emerging to take advantage of silver's unique properties.

Electricity and electronics are the industries that use the most silver and require the highest purity (99.99%) silver.

Sterling silver replaces copper to produce wear-resistant contact pints. Each contact can work millions of times. Add the rare earth elements, it will perform better and its life is extended several times.

Silver can be ground into powder, paste, or pressed into flakes, making it the best choice for the chemical industry.

Silver is used in two aspects. One is a catalyst, which is widely used in redox and polymerization reactions for the treatment of industrial waste gases containing sulfides. The other is electroplating preparation for industrial purposes, such as silver paste, and silver potassium cyanide.

Silver jewelry has a vast market in developing countries. Wearing a silver necklace can effectively absorb toxins from the body. When exposed to toxic substances or get sick, silver can turn black.

Silver cutlery is popular with families as it makes food not easy to ferment and turn sour. Silver commemorative coins are highly sought after by collectors because of their exquisite design, low circulation, and function of value preservation and increment.

Silver is more beneficial to health than gold, as it is a natural permanent sterilizing agent. Just a tiny amount of silver can destroy all harmful microorganisms. And silver ions do not develop resistance.

Silver has the best anti-inflammatory effect of any precious metal thus it is added to the bandages, absorbent cotton, and other medical dressings. Four silver-containing drugs-silver nitrate, silver protein, silver silica, and silver sulfadiazine are used to treat gonorrhea, cystitis, dysentery, enteritis, and burns.

Acupuncture, one of the Chinese treatments, uses silver needles to clear damp-heat.

Silver is not toxic, but repeat intake of silver can result in argyria, making your skin a bluish-grey color. For these reasons, medical doctors discourage the use of colloidal silver, discounting claims by some that colloidal silver is a cure-all dietary supplement.

Before the rise of digital media, photography and cinema are the areas that use the largest quantities of silver. America uses a large portion of silver in this industry.

The accuracy of this process makes it useful for non-digital consumer photography, film, and X-rays.

NASA identifies silver as the safest sterilizing agent, so they use it to make water containers and purifiers for the spaceship. More than half of international airlines opt for silver-based water purification systems.

Silver-copper ions can even replace corrosive chlorine to sanitize pools. Many countries use silver to purify the water in swimming pools as it does not irritate the swimmers' skin and eyes.

Besides, nanosilver coatings are applied to food packages and refrigerators.