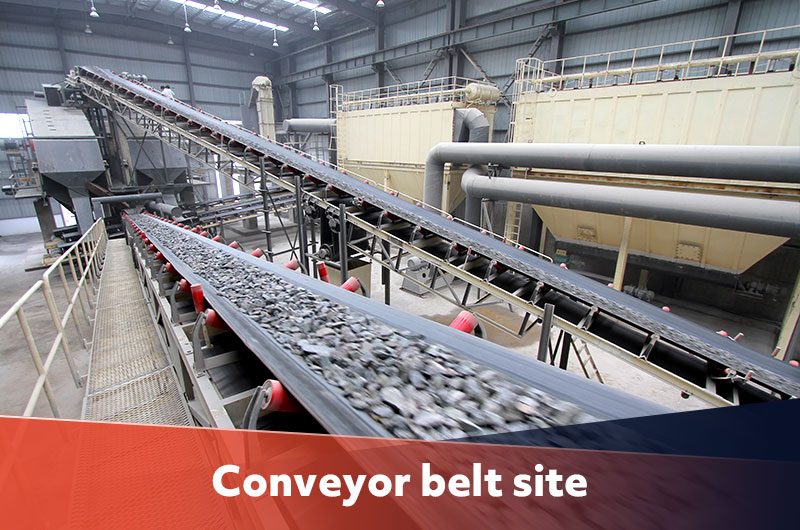 While belt conveyors provide a reliable, efficient bulk handling solution, they will occasionally experience belt mistracking, belt slipping and other faults. And when issues arise, they can wreak havoc on a production line.

Therefore, this article will introduce in detail the causes and troubleshooting for conveyor belt mistracking and conveyor belt slipping to ensure safe and efficient production. 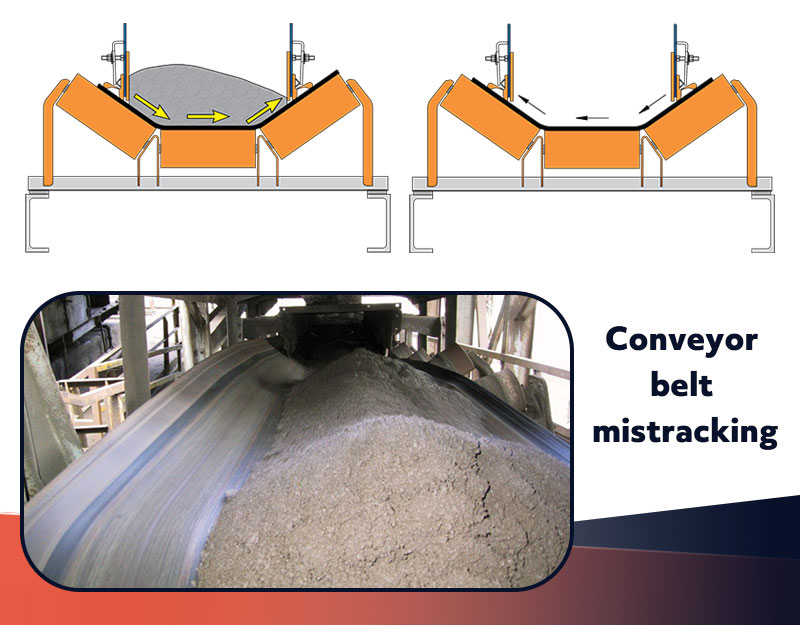 Belt mistracking not only impacts productivity but also causes violent friction between the belt and the frame, which causes the belt to soften and scorch. In severe cases, it may even cause a fire. 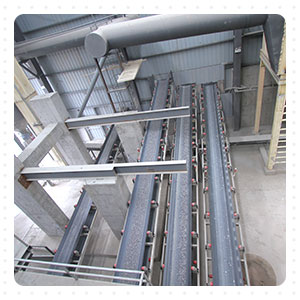 This is often caused by incorrect installation. Since the centers of these three are not in a straight line, the longitudinal centerline of the belt is not perpendicular to the axis of the roller, which causes the belt conveyor to run off the track. 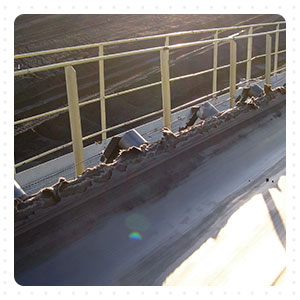 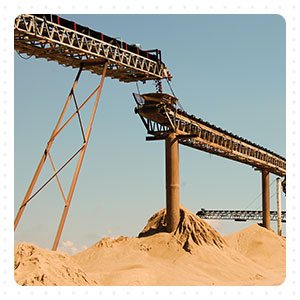 When the belt conveyor is running, the material shall be loaded evenly and continuously on the center part of the belt. Uneven loading will cause the belt to drift. It is mainly caused by off-center loading. If the material is loaded at the left side of the belt, the belt will run sideways to the left, and vice versa. 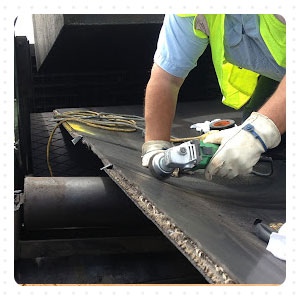 Mechanical splicing and vulcanized splicing are two commonly used belt splicing methods. Either way, the joints of the conveyor belt should be straight. If not, the tension on both sides of the belt will be inconsistent, resulting in mistracking. And wherever the belt joint runs, the mistracking occurs.

5. Material buildup on roller and idler. 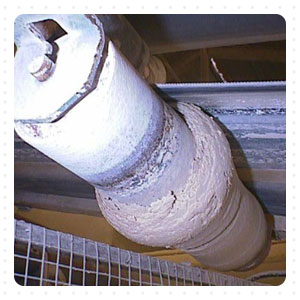 After the belt conveyor has been transporting materials for a period of time, there will often be material buildup on the roller or idler, which increases the local thickness of the roller or idler, resulting in an uneven force on both sides of the belt and causing belt mistracking.  Belt mistracking will invited more serious material spillage, causing a vicious circle. 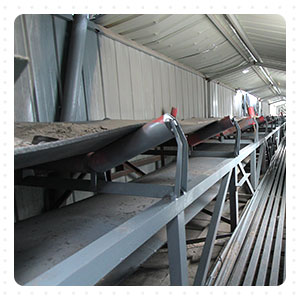 Idlers, where the axis is not perpendicular to the running direction, have a steering influence on the belt. Besides, the upper surface of the idlers should be on the same horizontal or inclined surface. If the installation error of the roller set is too large or the fastening bolts are loosened, it will cause the belt to deviate.

1. Align the head pulley, tail pulley and middle frame of the belt conveyor.

2. The belt conveyor shall be overhauled after a period of time, and the aged and deformed belt shall be repaired or replaced in time.

3. Adjust the position of the unloading chute so that it is in the middle of the belt.

4. Cut off the improper splicing part and redo the belt joint to make the joint straight. The standard is that the straightness tolerance on the length of 10m is no more than 20mm.

5. Shut down the belt conveyor and clean off the material built on rollers and idlers. Overhaul the cleaners or add new cleaners to clean thoroughly.

Belt slippage may cause material spillage. In severe cases, it may cause belt wear and breakage, and motor burnout. Therefore, belt slippage can be a significant safety hazard. 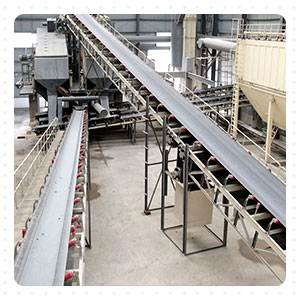 The belt functions well only in a surprisingly narrow range of tension. Sufficient tension ensures sufficient friction, making it impossible to drive the belt with loading.

Generally, a vertical heavyweight tension device or a heavy-duty trolley tension device is used for tensioning in a long inclined belt. However, due to the fall of the counterweight, the jamming of the idlers, and the excessive stretching of the belt after years of use, the tension of the belt will be seriously insufficient. Once belt slipping occurs, a large amount of material will be scattered and piled up, which is difficult to handle and needs a long downtime to deal with.

The screw tension device is for the conveyor with short length and small power. Due to factors such as screw rusting and excessive stretching, insufficient tension will occur after long-term use, resulting in belt slippage. 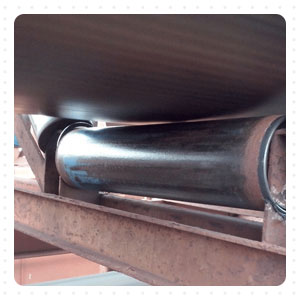 Conveyor pulley lagging is an essential part of a belt conveyor system. It can effectively improve the operation of the conveying system, protect the metal pulley from being worn and increase the friction between the belt and the pulley, thereby reducing the belt slippage. After the belt conveyor has been running for many years, the pulley lagging is severely worn, and the coefficient of friction between it and the belt will decrease sharply, which can easily cause the belt to slip.

3. Inadequate friction between the drive pulley and the belt. 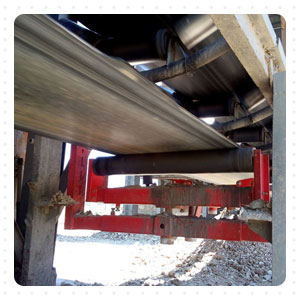 If the friction between the drive pulley and the belt is insufficient, it will easily cause belt slippage. Decreased friction coefficient caused by water belt and damp environment is the main reason for that. 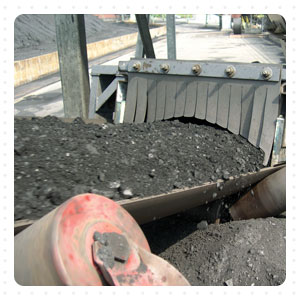 Conveyor belts carry heavy loads all the time, but they do have their weight limits. When a conveyor belt tries to move things heavier than its limit or starts with load, the belt may slip. 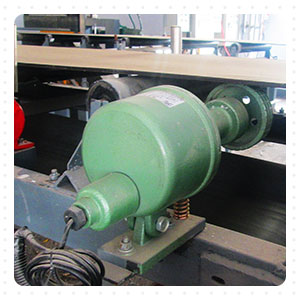 1. Maintaining an adequate belt tension is critical to preventing slippage. It's important to note that do not over-tension the belt, as it can stretch and damage the belt, as well as put added stress on the motor.

3. Sprinkle some rosin powder on the drive pulley, blow it in with blowing equipment instead of by hand to avoid personal injury.

4. Monitor the current of the belt conveyor and the electronic belt scale to control the weight of materials and avoid overloading.

If the shutdown is caused by false slip signal, clean the sticky materials on the belt slip detector, rearrange its position and eliminate electric appliance circuit failure.

The above are solutions to belt mistracking and slippage. In order to extend the service life of belt conveyor, and improve productivity, regular maintenance should be carried out on the belt conveyor.