Feldspar: The Kingdom of Colorful Gems

What glitters is not only fluorite, but also feldspar. The feldspar mineral family is huge, with abundant stones and rich gems. Feldspar is the most abundant mineral group in the earth's crust, known as "the first group of minerals in the world", which can be described as the kingdom of colorful gems. 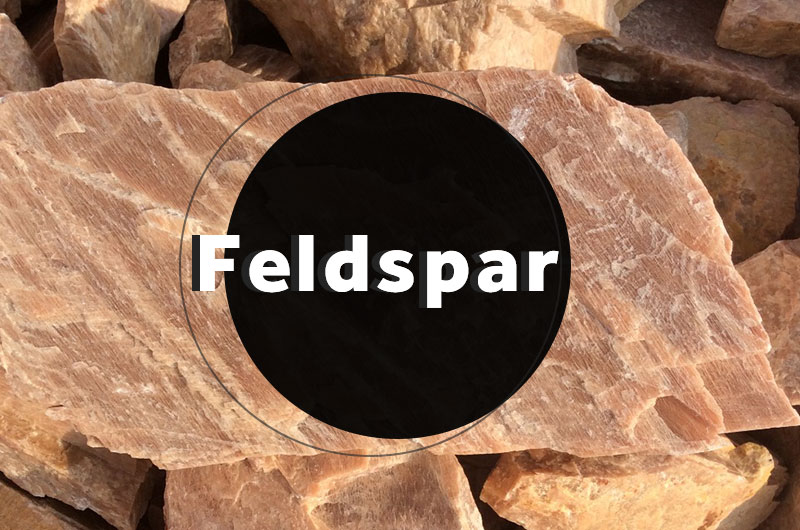 Feldspar is the most abundant mineral in Earth's crust

In the entire crust, the main minerals that makeup rocks are rock-forming minerals, such as feldspar, quartz, pyroxene, mica, amphibole, clay, olivine, etc. Surprisingly, feldspar group minerals are the most widely distributed. The total content is higher than quartz (silicon dioxide), accounting for about 50% of the total weight of the earth's crust. 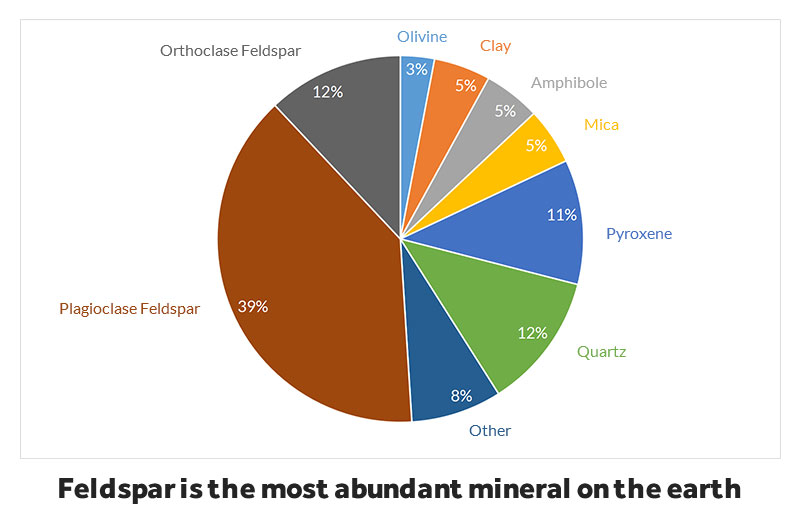 Feldspar is the most common and the most abundant rock-forming mineral, crystallized from magma in intrusive and extrusive rocks. Among them, 60% of feldspar minerals occur in magmatic rocks, 30% in metamorphic rocks, and 10% in sedimentary rocks.

The name feldspar comes from German

Feldspar is a general term for feldspar group minerals and is the main component of igneous rocks. The name has its historical origins, derived from the German feldspath.

"Feld" means "field" because some early specimens were found in the field, and "spar" is a geological term for non-metallic minerals, meaning "split", explaining that feldspar has a vitreous luster and good cleavage. In 1747, Johan Gottschalk Wallerius named the mineral feldspar.

Feldspar minerals have very similar structure, chemical composition, and physical properties. The following are the basic characteristics of feldspar:

Feldspar color is the most variable 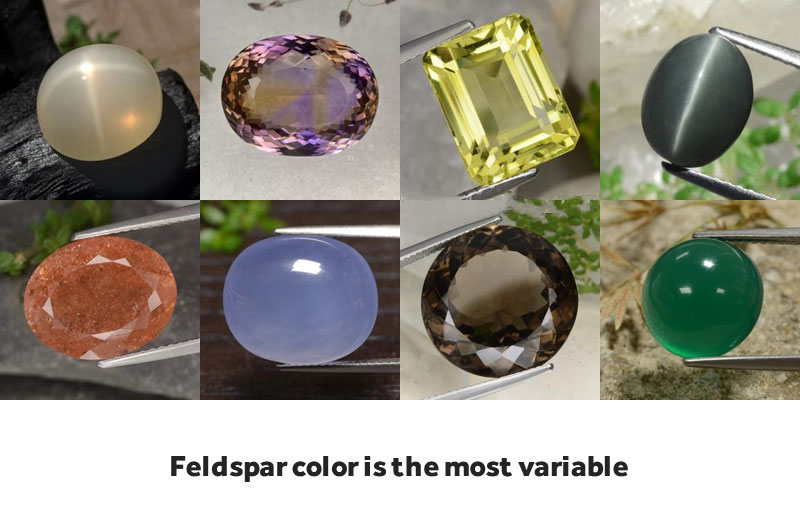 Feldspar color is related to the trace elements (such as Rb, Fe), mineral inclusions, and special optical effects it contains. Because different types of feldspar contain different minerals, their colors are also diverse.

Feldspar color is usually white, pink, gray, or brown, as well as colorless, yellow, orange, red, black, blue, green, etc. Feldspar with its beautiful color can be used as a decorative stone and secondary gemstone, which is very popular.

Feldspar has a huge family variety

There are many types of feldspar, which is a huge mineral family. According to their chemical composition, feldspar group minerals can be divided into two subgroups: potassium feldspar and plagioclase. They can be subdivided into:

Feldspar is the kingdom of colored gems

Feldspar is one of the most abundant mineral families in the world and a country of colorful gems. Some feldspar gemstones only occur in isolated deposits and are even rarer than diamonds, rubies, or sapphires.

There are various kinds of gemstones in the feldspar family, and orthoclase and plagioclase are mainly related to gems. Moonstone, amazonite, sunstone, and labradorite are some of the well-known jewelry varieties, which can shine dazzling light. Can't wait to see the brilliance?

1. Moonstone —— the birthstone of June 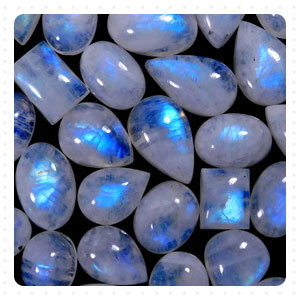 Moonstone is the birthstone of June and is the most valuable variety of feldspar gems. Among them, the blue moonstone has the highest value, as well as the white moonstone and orange moonstone. Wearing moonstones is believed to bring good luck, meaning passion and happiness. Moonstone is also known as the Lover's Stone, implying romantic love.

The moonstone shimmered with blue pulsating light, reminiscent of the white moonlight. This is a special optical effect, the moonlight effect. It is a layered intergrowth of two kinds of feldspar, which causes light scattering and makes the surface of feldspar float light.

Note: If you are interested in birthstones in other months, you can read this blog Garnet to learn about your birthstone. 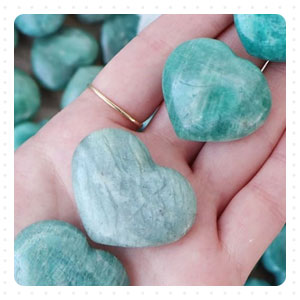 Tianhe stone, also known as "amazonite", is a variety of orthoclase. Amazonite has a lattice-colored green and white, and sparkles. Amazonite means luck and has the power to turn danger into danger, and can make people full of self-confidence.

Tianhe stone is a substitute for jadeite

Tianhe stone has many production areas and large output. It has been used in jewelry materials for a long time. It is also a popular gemstone material. Emerald green amazonite can be used as a substitute for jadeite. 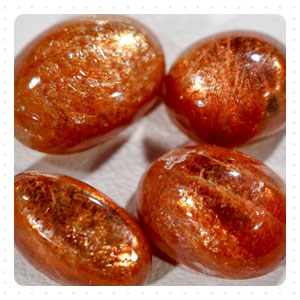 Sunstone is a type of plagioclase, named for the golden highlights it reflects when exposed to sunlight. It is said that the sunstone is a gift given by the sun god to mankind, symbolizing vitality, courage, and vigor.

Sunstone will reflect light to give a golden-yellow flash, that is, the sunlight effect, do you know why? This is because the crystal contains reddish-brown flaky mineral inclusions such as hematite, goethite, and mica. 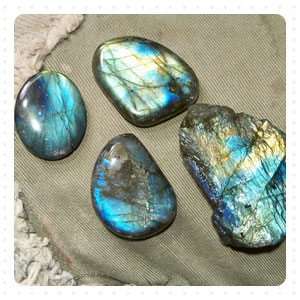 Labradorite is a type of plagioclase, consisting of albite and anorthite. It can flash colorful rays like the sun and is called "spectral color", hence named spectrum stone. Labradorite symbolizes romantic love, as well as vitality and happiness.

Turning the labradorite can see the rainbow

When the labradorite is rotated, its surface can show blue, green, orange, yellow, purple, and other halos. This is due to the halo effect formed by the light interference between the thin layers of labradorite twins. 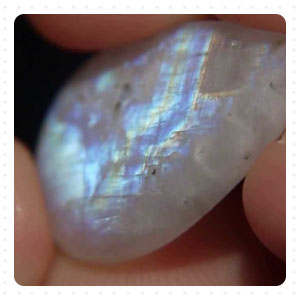 Rainbow moonstone is not a form of moonstone, but a transparent labradorite mineral, which belongs to calcium sodium plagioclase. Its meaning is strong protection and increased patience.

Rainbow moonstone can show a halo effect, and colors such as blue, green, purple, and yellow can be observed in a specific direction. Because of its spectral color, it was named rainbow moonstone by merchants.

Therefore, as a "multi-faceted" stone, the feldspar group can be called the "top stream" of the mineral family. As a famous family in the gem family tree, it is more and more loved by people.

2. The Most Abundant Group of Minerals