Guide to Mining Investment in Kenya

Many investors think it is unwise to invest in Kenya's mining industry due to Kenya's backward mining technology and haphazard legal system.

Today, we will discuss whether it is promising to invest in Kenya's mining industry in 2021 from the perspective of Kenya's mineral resources, mining exploitation and mining laws.

Kenya is located in Eastern Africa between Tanzania and Somalia. The total area of the country is 581,309 km2 and has a population of roughly 48 million. Kenya's climate varies from tropical along the coast to arid in the interior regions. The GDP of the country was $95.50 billion in 2019.

Kenya's language: Swahili is the national language, Swahili and English are both official languages.

Kenya's religion: 45% of the people in the country believe in Protestant Christianity, 33% believe in Catholicism, 10% believe in Islam, and the rest believe in primitive religions and Hinduism. 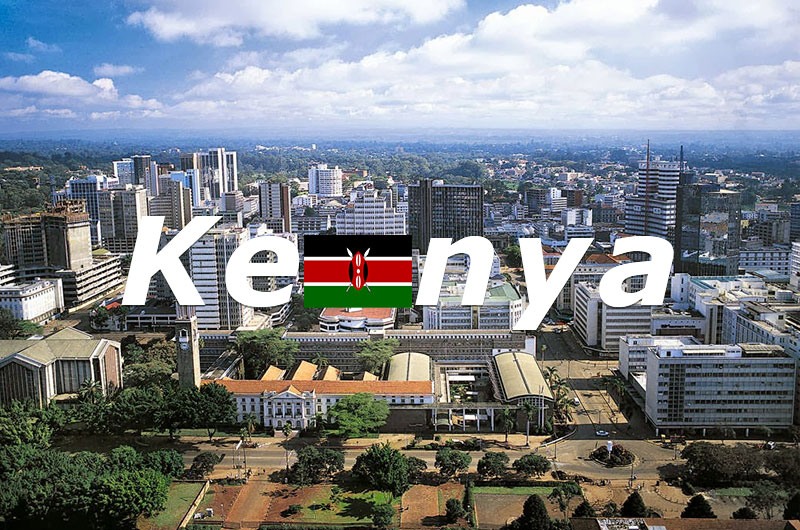 Mineral resources and their exploitation situation in Kenya

The minerals that have been developed are mainly distributed in southern Kenya and the coastal areas of Kenya. In recent years, resources such as large gold mines, coal mines, rare earth and titanium mines have been discovered in the western and eastern regions of Kenya.

There are many gold deposits in Kenya with large reserves, but there is no exact reserve data yet. The known gold resources are mainly distributed in the Nyanza Province and Kakamega, Vihija, Migori, Demara, Bondo, Char, Poquete and Turkana, and Nadi.

Kenya, as the world's fifth-largest reserves of titanium ore, is also very rich in titanium ore resources and production.

Tiomin Resources Inc, a Canadian mining company, discovered a large number of titanium deposits in the coastal areas of Kenya. An early assessment of Kenya’s mineral potential showed that the mineral reserves of the two titanium deposits in the Kwale mining area are 140.8 million tons, with an annual output of 77,000 tons of rutile, 38 thousand tons of zircon and 330,000 tons of ilmenite.

Kenya’s iron ore deposits are mainly distributed in Taveta, Meru, Kituyi, and Kilifi. Some iron ore deposits are also located in Mamante in the Greater Taraka region, Cekulu and Kituyi counties in Mwenji County. Ikuza, Kishowa in Tatavita County, Isara in Mbere County, Baragoi in Samburu County, and Bukura in the southwest of Kakamega.

The largest iron deposit in Kenya has been discovered in the Kakamega area. The main minerals are pyrite and pyrrhotite, and the associated minerals are chalcopyrite and sphalerite. It is estimated that the ore reserves of the deposit are about 17 million tons and the depth is 90m.

Being located in the Mozambique Belt, also known as the East African Gem Belt, Kenya has abundant gem resources. The Taveta area in southern Kenya is a group of gem mines. At present, the large-scale mines are garnet mines and ruby mines. Emeralds have not been discovered in Kenya, but emeralds have been found in neighboring Ethiopia in northern Ethiopia and southern Tanzania, which indicates that Kenya may become another emerald-producing area.

The output of manganese ore in Kenya is not high. The manganese deposit with enormous development potential is the manganese ore deposit located between Mombasa and Malindi. Other manganese mines are mainly distributed in Kilifi, Samburu, Taveta and other areas.

At present, the largest copper mine discovered in Kenya is located in the Matu-Kitui area. The thickness of the ore deposits is stable, and the copper grade is between 1.0% and 7.5%. It is roughly estimated that the copper resources of this copper mine are 1 million Ton and above, reaching the scale of a large copper deposit.

Oli and gas in Kenya

Kenya's oil exploration began in the 1950s, and the first oil well began to be drilled in 1960. In 1986, Kenya revised its petroleum exploration and production legislation to provide appropriate incentives and flexibility to attract international exploration investment in the country. In 2012, the British Tullow Petroleum Company (Tullow) discovered oil resources in the Lokica Basin in Turkana, northwestern Kenya, with preliminary proven oil reserves of 750 million barrels; subsequently in the Mandela Basin in northeastern Kenya Oil was also discovered, with preliminary proven oil reserves of 200 million barrels; British Natural Gas Company discovered both oil and natural gas resources in the Lamu offshore block in Kenya. 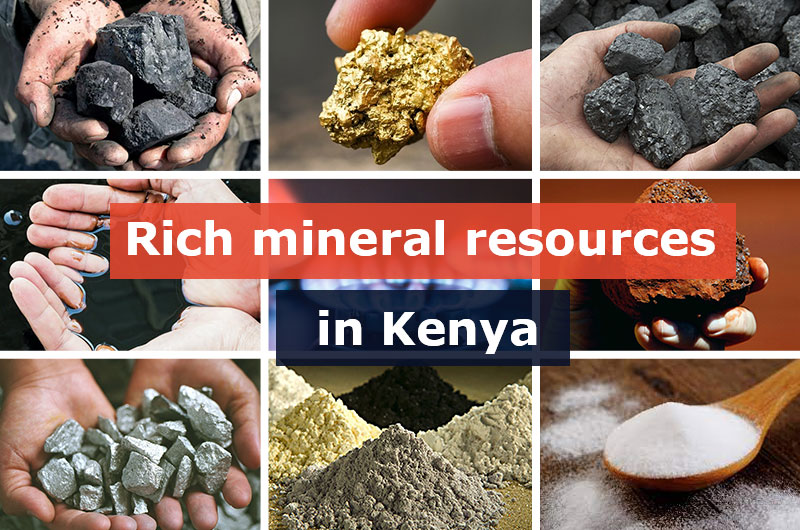 The discovery of mineral resources enabled this country, which originally relied on agriculture and tourism as the pillars of economic development, to become a mineral resource-rich country in just a few years.

According to Monica Gichuhi of the Kenya Chamber of Mines, Kenya is emerging as a new and active player in the mining industry. "We have deposits of titanium and oil in Turkana, making Kenya a place to invest in," she said in a press interview.

Since 2001, Kenya's budget for mineral resource exploration has continued to increase. In March 2013, Kenya established the Ministry of Mining. The ministry is tasked with undertaking mineral exploration, making mining sector policy, creating mineral resource inventories and maps, and overall sector development. In 2016, the Ministry announced an airborne survey to improve the availability of geodata.

Most of the large-scale mineral deposits in Kenya are controlled by foreign mining companies, such as the gold mine in Migori, ilmenite mines in Kwale and Kilifi. The scale of state-owned and private mines is small. At present, in addition to the large-scale development of mineral resources such as gold, gemstones, and ilmenite, there are still many mineral resources that have not been effectively exploited and utilized. 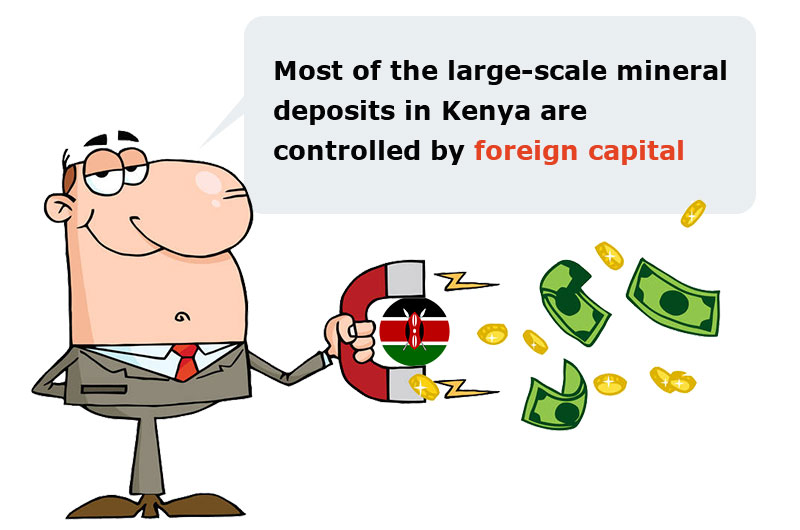 Kenya's economy is relatively stable, the middle-class population is growing rapidly, and the domestic market is expanding steadily.

Kenya is the transportation hub and gateway of East Africa. Investment in Kenya can also radiate to the landlocked countries of East Africa with the advancement of East African regional integration, which is conducive to the development of the entire East African market.

Now, Kenya has become the second-largest country attracting foreign investment in Africa. In the long run, Kenya will rank at the forefront in governance and economic diversification, infrastructure, human resource development, logistics. Therefore, foreign capital has the dual advantages of resource exploration and absorbing foreign capital in the mining sector in Kenya.

Kenya's law stipulates that the minimum amount of foreign direct investment is $ 100,000, which is too high, causing some obstacles to the entry of foreign capital.

In terms of Taxation, business scope, enterprise ownership, and land, Kenya has stipulated different treatment standards for foreign capital from domestic capital and set many business restrictions on foreign capital.

3 Guide to mining investment in Kenya

3.1 Protect the environment and care for animals

If someone hurts an animal in a Kenyan animal sanctuary, the animal police have the right to kill him on the spot. 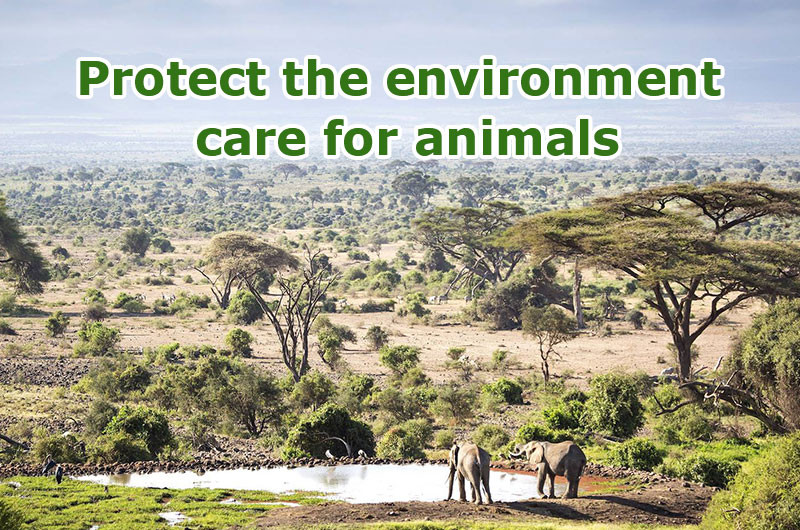 Among the three interests of enterprises, the government and the people, the Kenyan government lays a lot of emphasis on public interest, stipulating that mining companies must fulfill their social responsibilities and repay the local society.

Mining investors must strictly abide by contracts to improve corporate reputation. The Kenyan government's projects and projects funded by international organizations are rarely in arrears with construction payments for no reason.

For the mining sector, investors should carefully study The Mining Act, The Mining Bill, Environmental Management and Coordination Act, Transport Licensing Act, Land Control Act, Water Act, and so on.

For the investment management system, investors should focus on the mining market access, foreign exchange and foreign capital protection, and the tax system for mineral resources exploitation. For example, in August 2013, the Ministry of Mining of Kenya increased the fee for licenses and other activities related to prospecting and mining, and correspondingly increased the gross sales tax of gold, rare earth, niobium, and titanium ores.

Before choosing a mining investment project, investors should combine their advantages, carefully analyze Kenya's resources and market, learn about various aspects of Kenya's policies and regulations, market conditions, transportation service facilities, and even customs and etiquette.

Do a good job in the pre-investment feasibility study, draw up a positive and stable development plan to avoid investment risks, and expand project returns as much as possible.

4 The impact of Kenya’s Mining Act 2016 on investors

Before the promulgation of the current new Mining Act (2016 edition), Kenyan mining activities have always complied with the old "Mining Act" (Cha. 306), promulgated in 1940). The new law regulates all mining activities in Kenya and establishes a new legal framework for the management of mineral resources in Kenya. 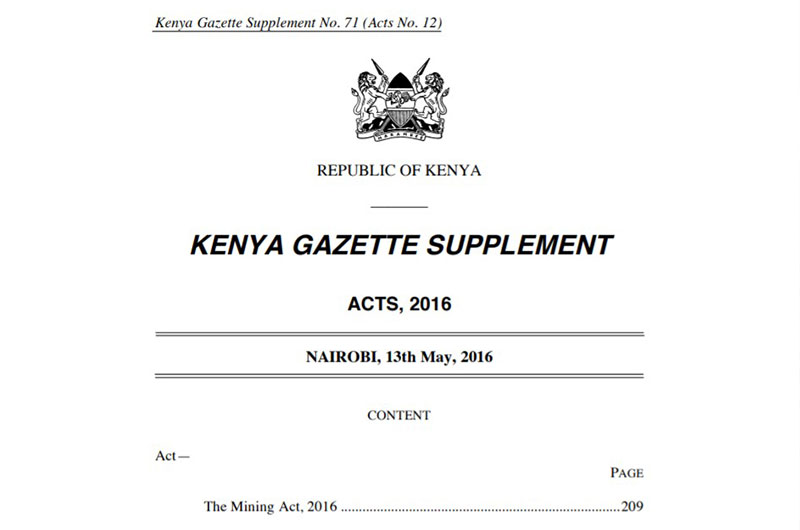 The impact of the new law on investors is as follows:

Localization is the first issue to be faced in investing in Africa, and the mining sector sets stricter requirements.

The state participates in shares and does not pay the consideration. Kenya requires 10% of the shares to be nationalized free of charge. After operating expenses reach the limit set by the Cabinet minister, 20% of the shares will enter the local property rights exchange market.

Localization of employment requires the training of local workers. Although there are no specific requirements, it makes law enforcement is more arbitrary and increases the employment risks of investors.

4.4 Direct management of the Mining Ministry

The establishment of the mining court means that disputes can only be resolved in court, and arbitration in the investment agreement will become impossible.

Note that mining on private land requires the consent of the landowner. When signing an investment agreement, you must first review the nature of the land, find the real landowner and obtain consent. Ignoring this detail may lead to investment failure.

The requirements of electronic office work and the backwardness of network communication in Kenya have made it more troublesome for investors to handle relevant documents. In actual operations, there must be advances to avoid unnecessary troubles caused by expired certificates.