Different industrial sectors have different quality requirements for manganese ore processing, so the difference in ore grade poses a challenge in choosing a suitable beneficiation process. 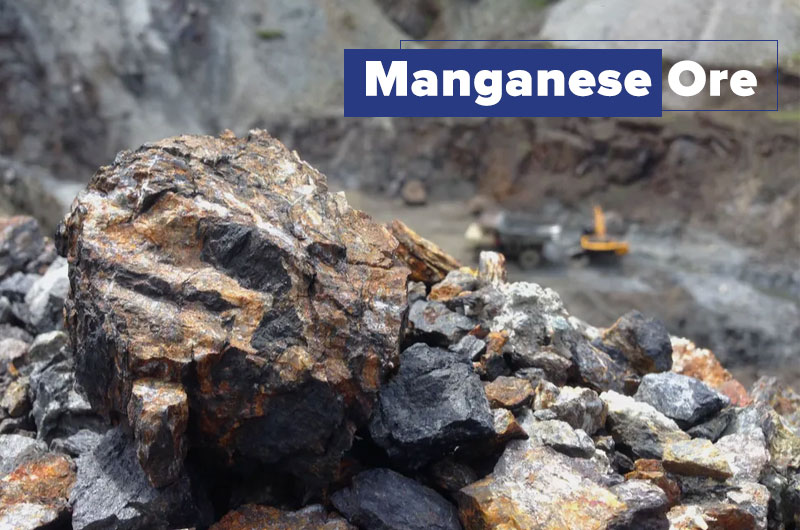 1. Grade requirements of the metallurgical industry

Manganese ore can be directly used as a raw material for steelmaking and ironmaking, and also used to make ferromanganese alloys and metal manganese.

When smelting ferromanganese alloys, the useful elements in manganese minerals are manganese and iron. The manganese content is the main indicator, which requires a certain proportion of iron and manganese. Phosphorus is a harmful element in manganese ore, and phosphorus in steel reduces the effect of toughness.

The manganese ore is mainly used to prepare manganese dioxide, manganese sulfate, and potassium permanganate in the chemical industry.

Therefore, for manganese ore with low grade and high impurity content, beneficiation must be carried out to obtain high-quality concentrate that meets the requirements of industrial production.

① Washing is the use of hydraulic washing or mechanical scrubbing to separate the ore from the mud, and the washing cost is low.

② Screening can be used as an independent operation to separate products of different sizes for various purposes.

① The operation of magnetic separation is simple, easy to control, and has strong adaptability.

② Under the action of the magnetic separator, the grade of manganese concentrate can be increased by about 24% to 25%.

① Gravity separation method is suitable for manganese oxide ore with high density. It is the mainstream method of manganese ore beneficiation.

② The cost of the gravity separation process is much lower than that of the flotation process, and the operation is simple and flexible.

Gravity-magnetic separation plant mainly deals with leaching manganese oxide ore. The jig is used to deal with 30 ~ 3mm ore and the high-quality manganese concentrate containing more than 40% manganese can be obtained.

The jig tailings and the washed ore less than 3mm are ground to less than 1mm, and processed with a strong magnetic separator.

② It includes two steps. The manganese concentrate obtained by dressing has a high grade.

① Flotation extraction of manganese concentrate can not only effectively remove coal slime, but also improve the quality.

② If the ore is agglomerated or calcined again, the grade of manganese ore can be improved more effectively.

Fire enrichment, generally called the manganese-rich slag method, is a method of processing lean manganese ore with high phosphorus and high iron. It is a high-temperature beneficiation method, which utilizes the different reduction temperatures of manganese, phosphorus, and iron to control the temperature in a blast furnace for separation.

① It can effectively separate iron and phosphorus from ore, and obtain the manganese-rich slag with low iron and low phosphorus.

② The process is simple and stable. The ore through the flotation process can be sintered, which greatly improves the grade of manganese ore.

① The recovery rate of the dithionite method is high, which is suitable for the production of high-quality manganese concentrate.

② It is a promising method for manganese mineral processing.

A wide range of uses of manganese ore

After processing in the manganese ore plant, manganese concentrates of different grades are obtained, which are widely used in our daily life. 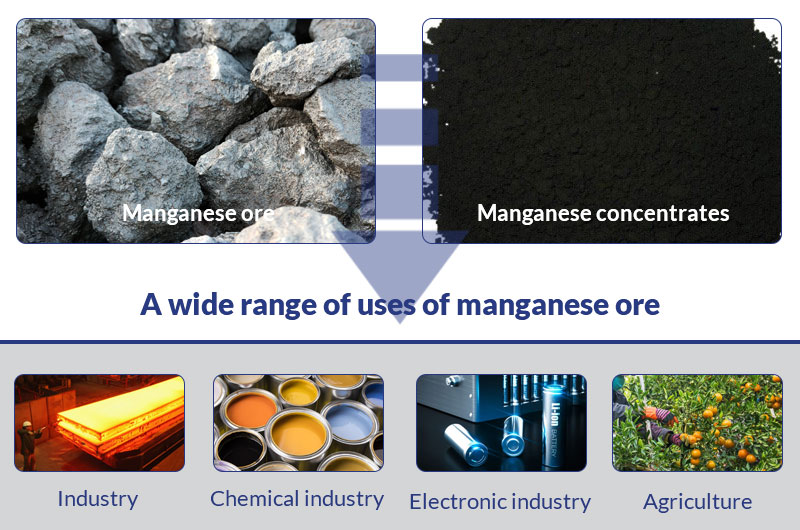 In the annual output of manganese ore, 90% is used for steelmaking and 10% is used for non-ferrous metallurgy, chemical industry, battery, agriculture, etc.

After studying the beneficiation process of manganese ore, Ftmmachinery launched a customized plan for the manganese ore production process according to the ore characteristics, which is well received by users. If you have needs, we will serve you. Yes, I am interested!